Africa’s chronic power problems have escalated into a crisis affecting 30 countries. This tolls heavily on economic growth and productivity

The entire installed generation capacity of Africa’s 48 Sub-Saharan countries is just 68 gigawatts, no more than Spain’s. As much as one-quarter of that capacity is unavailable because of aging plants and poor maintenance.

Per capita consumption of electricity in Sub-Saharan Africa (excluding South Africa) averages only 124 kilowatt-hours a year and is falling. The rate of consumption is barely 1 percent of that in high-income countries. If entirely allocated to household lighting, it would hardly be enough to power one light bulb per person for six hours a day.

More than 30 African countries are now experiencing power shortages and regular interruptions in service, leading many to rely on very costly leased generating plants as an emergency stopgap (see figure). Frequent power outages mean big losses in forgone sales and damaged equipment—6 percent of turnover on average for formal enterprises, and as much as 16 percent of turnover for informal enterprises unable to provide their own backstop generation. The economic cost of power shortages can amount to more than 2 percent of gross domestic product. For some countries, it has shaved as much as one-quarter of a percentage point off annual per capita GDP growth rates. 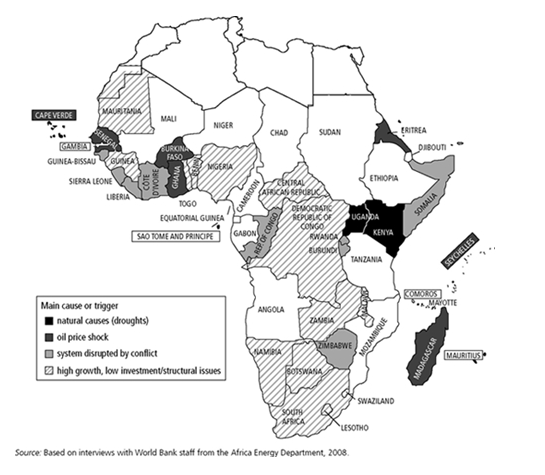